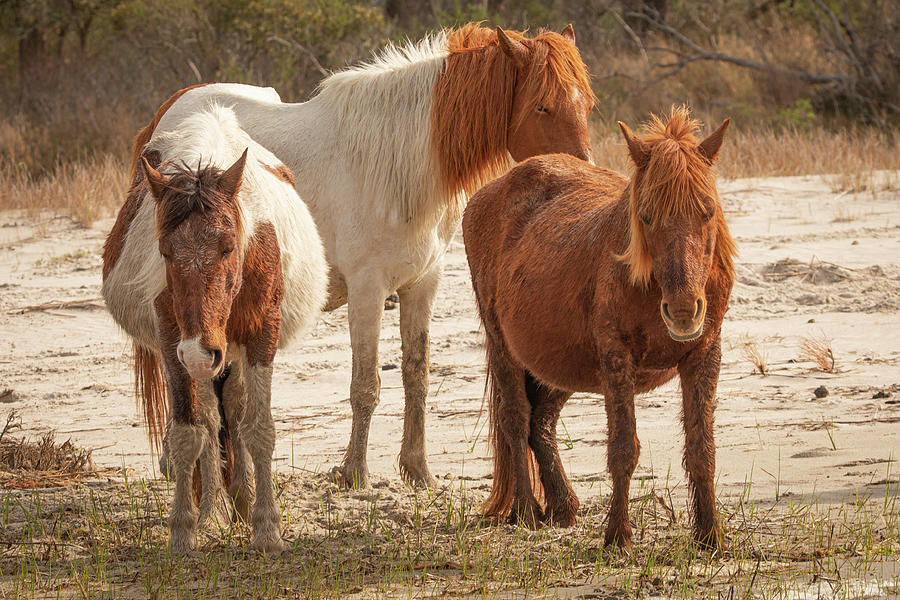 A group of ponies nap on the beach at Assateague Island in Virginia. This group is part of the Southern herd on the Virginia end of the island. The Chincoteague wild ponies actually live on Assateague Island which is a protected national park. Assateague Island is off the coast of Maryland and Virginia. Part of Assateague lies in Virginia and part lies in Maryland. Each state has their own herds of horses that are kept apart by a fence dividing the state line. Along with their own herds, each state has their own methods of population control for their horses. Virginia is only allowed to keep 150 horses at a time on the island. On the 3rd weekend of July, the ponies are rounded up and make their famous swim to Chincoteague where the babies are auctioned. Some babies are selected as "buybacks" and are returned to live out the rest of their lives on the island. Buyback ponies are bid on by donors. The monies raised go to the Chincoteague Volunteer Fire Company and the donors are allowed to name the pony.

Every pony on the island has a registered name. From left to right these ponies are: Got Milk, Sonny's Legacy, and Suzy's Sweetheart

WOW, this is fantastic

Great photo of the wild ponies in Chincoteague!