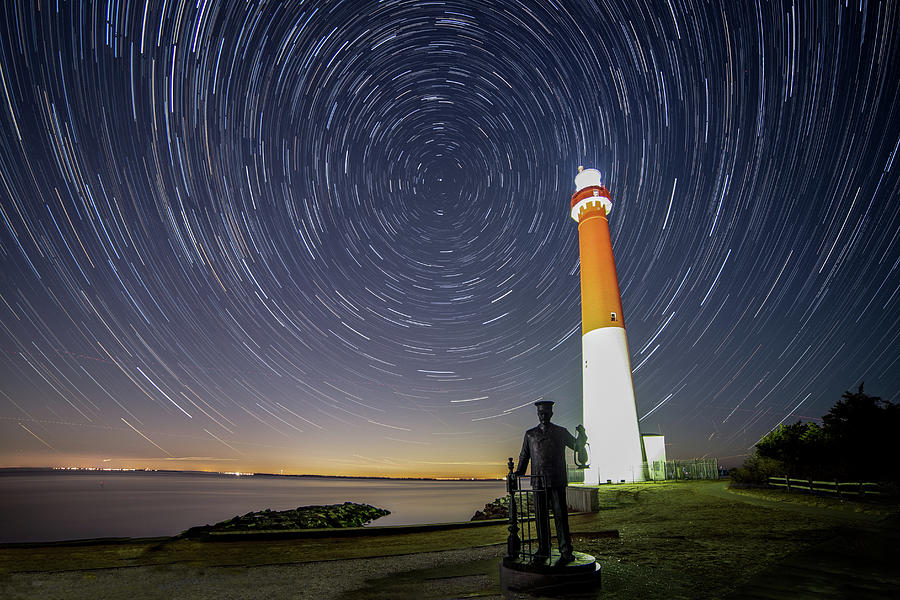 The Night Watch at Barnegat Lighthouse

The Night Watch at Barnegat Lighthouse

Star trails captured over Barnegat Lighthouse with the lighthouse keeper statue in the foreground. This image consists of over 100 individual images stacked together to create the star trail effect.

Barnegat Lighthouse is located on the northern end of Long Beach Island and is affectionately called "Old Barney" by locals. The light was first lit in 1857 and remained active until it was deactivated in 1944. It remained deactivated until 2009. The Friends of Barnegat Lighthouse State Park, a local non profit organization, raised funds to reactivate the lighthouse and it remains in service daily from dusk to dawn.

A marvelous image of star trail and the lighthouse! Great composition!

BRAVO! Your artwork has earned a FEATURE on the homepage of the FAA Artist Group No Place Like Home, 1/09/2022! You may also post it in the Group's Features discussion thread and any other thread that fits!

Stunning! Star trails are awesome and combined with a beautiful lighthouse!. Wonderful artwork! I am very pleased to feature your lovely artwork in the group ‘Covered Bridges and Historical Buildings.’ Please add it to the “2023 First Quarter Featured Image Collection” thread in the discussions area to record and display your image amongst the best in the group. Thank you! 1/8/23